A long drive ahead, so we stagger over to the Little Chef and squeeze ourselves behind one of the tables. Benches are screwed to the floor so can’t imagine what happens to those with a slightly fuller figure. The only thing I feel like is toast and coffee so Neil makes up for it by having the ‘full english’ – eggs, bacon, sausage and fried potatoes…and toast. Feels good going down south although have no idea what sort of reception the show will get. Down south they have a reputation for being less demonstrative, or is it the other way round ? The air is warm almost balmy and spirits lift. Drive to the sea front and look for the Madeira Cove Hotel.

The name sounds ominous and we imagine a dark bar-like place with hammocks for beds but it turns out to be a rather nice B+B run by a lovely guy called Andrew. He has tattoos from an earlier life all over his arms and now he runs this hotel from which he gets little respite. We leave the bags and tumble out into the sunshine to look for the Palace Theatre. 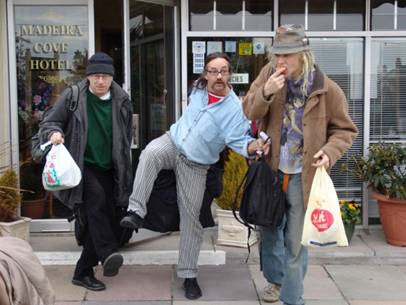 We find the gig without too much trouble but it is a strange place. The theatre itself needs a lot of money spent on it. The seats are not raked so you have to hope that only a small person sits in front of you so you can get a clear view of the stage. Outside, in the bar however, money is being spent so this looked bright and cheerful, but The Playhouse is just one of the many theatres which is kept alive by a small group of hard working and dedicated people trying any way they can to raise money in the face of almost certain closure. This is one of the few places where I do not mind giving a percentage of the money I get from the merchandising. 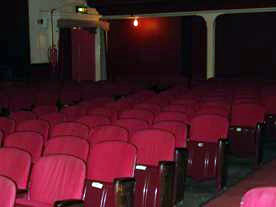 Back in The Madeira Cove Hotel we creep into the upstairs lounge to share the wine and the few bags of crisps etc we have gleaned during the day.

Neil’s thought for the day ‘Mellow yellow. That’s Donovan. I borrowed his capot in Philadelphia!’

Next morning we drive along the coast to Paignton which is always thought of as a respectable, rather snooty seaside town. In fact, it is the opposite. One of the main roads consists of slot machine arcades, novelty shops and charity shops plus the associated swathe of cheap and nasty food stores and loud cafes. We are looking for a present for JJ whose birthday is a few days away but it is almost impossible to get anything even vaguely funny without being vulgar or even just a good idea. We retire hurt to the hotel – one of the grandest. I go for a walk while Neil, Tom and JJ head over to the Pier Café having tried to get food at the hotel dedicated to making things easy for itself and difficult for it’s clients. The café turns out to be a winner. They have really good fish and chips and a sensational fruit sponge for dessert. None of the guys move again till we leave for the gig. The theatre is very similar to last night’s but with a great audience who sing along with the old songs and really appreciate and enjoy the new ones. At the end the grown-up children and wife of one of our greatest friends who died many years ago come and introduce themselves. Amazing to see them. Talking about Jim brings back even pre- Bonzo Dog memories. There actually was life before the Bonzos! Later we meet again in the hotel. Nell, Jim’s daughter, wants to interview Neil for her college magazine. The day staff are off duty and the night staff are quite happy to let us enjoy ourselves, providing drinks for as long as we ask for them. We finally call it a day and go up to our rooms overlooking the sea. A cool fresh breeze drifts in through the open window. We all sleep well. 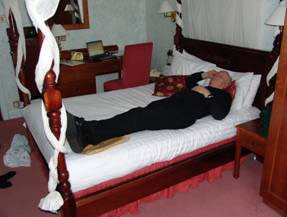