Today Neil and I visit a NY accountant who is actually quite upbeat about the whole experience and demonstrates how a loss doesn’t have to be all bad (trade secret so no more about that). He has answers to all the questions we put to him. One positive thing about this visit has been that we have linked up with various agencies dealing specifically with touring bands -car rentals and instrument hire and now this accountant. It has taken quite a few visits to sort all this out, I think because Neil and I have been trying to organise things ourselves. People like Paul McCartney and Jethro Tull have people to do it for them. Still we understand a whole lot more about how things work now. Spend a lazy day with lunch the only exercise and get to Dillons around 6pm to meet Andre and his camera crew who are filming tonight’s show. They also want Neil to do a bit to camera for their own film, so Neil complys while the new sound guy Demitri waits impatiently as time ticks by. Finally around 7pm the band can do a sound check and they find all sorts of gremlins in the equipment, particularly Tom’s bass which has a severe rattle. The sound guy could have panicked but he is the model of focused thought and after a worrying fifteen minutes the band finally does the soundcheck and the sound is fantastic. Audience in late and there are quite a few this time including Neil’s New York agent Robert Rowland, his wife Susan and colleague Chris.

Tonight everything goes well – whether it is the fact that they are being filmed or just that the audience is responsive and in good form. Whatever, the band play their socks off to tremendous applause and standing ovations. Once again The young Alister is there (third time) with his father and sister Robyn and this time I get a photograph of them.

Afterwards the band are really up. Demitri enjoys the show as much as anyone and he is hugely thanked for getting the levels so right. The camera crew are happy – everyone is happy. After a drink with the bar staff, Tom JJ Neil and I find an Italian restaurant which happens to have a great selection of music and enjoy the sweetness of a successful evening, almost unable to resist dancing to the ‘bollywood’ music -you remember – you have to mime screwing in a lighbulb with one hand while patting a dog with the other. Sleep, not well, but well past 6am.

talking about his next song – ‘a tribute to songwriters everywhere but to no-one in particular’
– before he puts on the oversized glasses.

One of Rory Motion’s Drainpipes

and JJ the ‘tea’ drinker 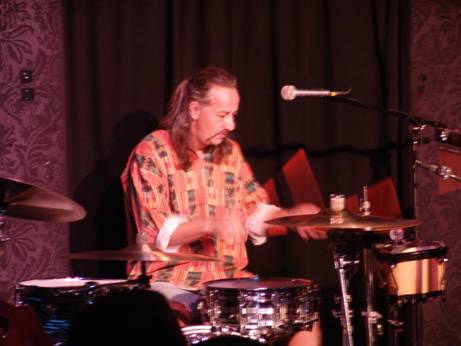