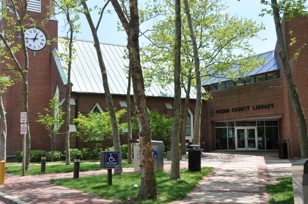 We had a great breakfast – a huge fruit bowl with melons, strawberries, grapes, as well as natural yogurt, walnuts, scrambled eggs and coffee. Then checked out and left for an early gig in Ocean City Library.
The drive took about an hour and the GPS took us through back streets and away from any freeways. What a difference. Every small area had its own personality, there were yard sales, Bar-B-Qs, fabulous wooden houses with decorated verandas and of course the forests. As we pulled into Ocean City we were met by a notice which said ‘YOU ARE ENTERING “A BETTER QUALITY OF LIFE” ENFORCEMENT ZONE’. We looked for signs of coercion. Ocean City is, I read, a strongly republican area – due to a high proportion of large senior citizen communities. Can imagine ageing vigilante groups prowling the streets at night looking for people who are not enjoying themselves or who have worn out shoes, or who aren’t eating the right food etc Presumably Bill Maher and Jon Stewart get no audience ratings from here. We were early so we wandered down to the river and sat in the sun.. We were looking forward to seeing James from Yo La Tengo with his partner Amy at the gig. In spite of the large, echoey hall the sound is good. Took some photos, but the background on the stage is painted a sort of yellow wash and Neil is wearing a sort of orange wash shirt and he is a little tanned -a sort of a beigy wash and really you couldn’t tell where he was – he sort of merged with the background. Not a huge audience again but it is such a good show that they all join in as if they were part of a super bowl crowd. Slightly worried abut the CD sales – we ran out last time we were in USA so this time we bought an extra box full and we have only sold about 25 in three gigs. There are 2 new CDs which are taken from 4 radio shows Neil did for the BBC a couple of years ago – BEST BITS PART 1 and BEST BITS PART 2 – half sketches and half music. We also have WORKS IN PROGRESS with us which is a fabulous all-music CD. 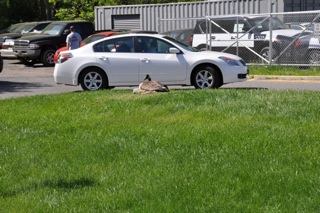 After the gig we went with anticipation to our next hotel at West Long Branch – picked because it was so near the sea. Actually turned out to be two and a half miles from the sea and a notice about the presence of Stink Bugs in the area did not fill me with enthusiasm. The room was Ok but we drove out to get some sea air. The beach is fantastic – huge and sandy. It was approaching sunset so the air was blueish – just like the Mediterranean. We ran, jumped, dipped our toes – all the silly things people do when they are near the sea. We had no buckets for sand castles – it was a bit like the ‘walking, jumping, standing still’ film. We made a video for Max and Issy and then looked for a place to eat, and by sheer chance found an amazing Italian restaurant. That felt good – not a chip in sight.