A Garden For George

Walking through Friar Park last June I was reminded what a great gardener George Harrison was. Chelsea 2007 had just finished and, in an idle moment I sketched out an idea for a garden for 2008. I wanted to pay tribute to George the gardener, but I wanted it to reflect different parts of his life- it had to tell a story. I worked on the design for about a week and then took it to Olivia as a surprise. Olivia loved it and agreed to part sponsor it. I had divided the site into four areas to represent George’s childhood, his Beatle years, his maturity and then finally his passing on to the next life. The garden had no title, till Olivia remembered a line from one of his songs ‘Floating down the stream of time from life to life with me.’ So the garden was called ‘From life to Life, a Garden for George’, and the beautiful line was written in steel letters along the side of the rill. 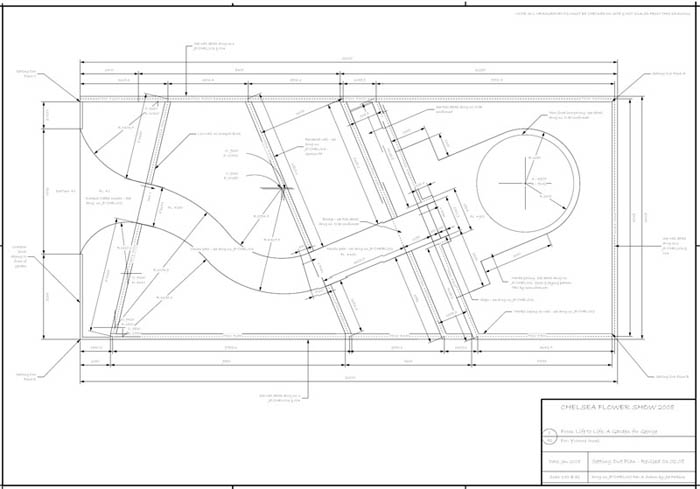 So this was the basic drawn design and below the interpretation of it by the illustrator John Keane. 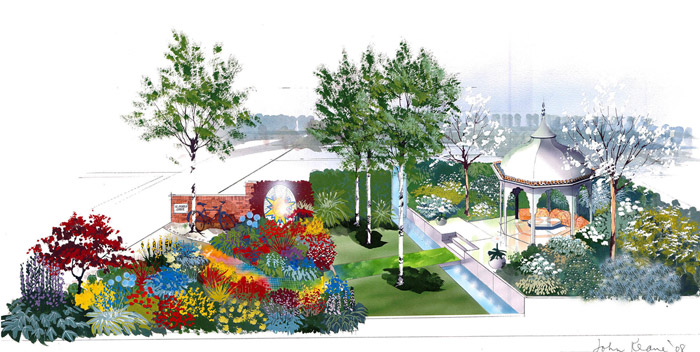 Here you can see the four areas described in detail below. What I had to do was to make this look like a garden and yet work as a narrative-wondered at this point whether I had taken on many more things than I could possibly chew. We toyed with the idea of using George’s painted mini in the garden but took it out when we realised that it would be too much of a distraction. On press day Damon Hill drove Ringo to the show in the Mini, parking it beside the garden for an hour. There was a photographic scrum and hours later I still had yellow dots before my eyes.

An overview of the garden

This is probably the best place to start – it shows most of the garden viewed from the ‘Liverpool’ end. 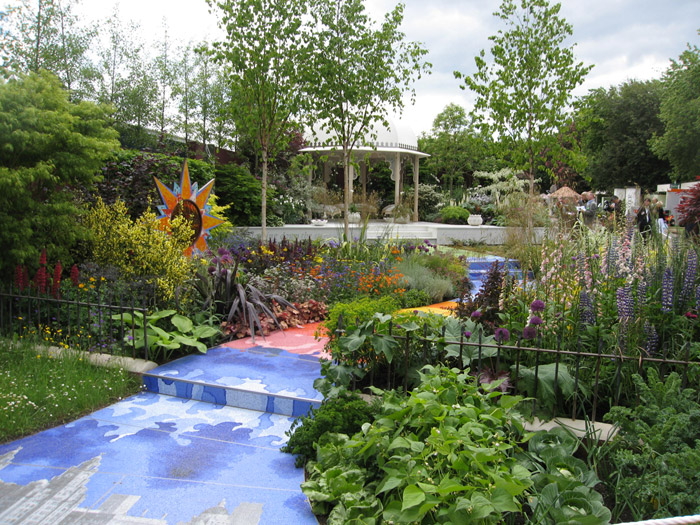 We managed to get original red bricks from Liverpool, and the nameplate ‘Arnold Grove Unadopted’ was fixed to it. We found a child’s bike identical to the one in Olivia’s photograph of George as a child. We put in a three stemmed ‘town’ birch tree. The ‘wild’ grass around the tree was actually dug up and transported from Friar Park to Chelsea by Hugh Netley – one of George and Olivias gardeners. Across the path was a reference to George’s father’s vegetable patch with a healthy display of beans, cabbages,tomatoes etc. The path, which was created by glass artist Brian Clarke, features the Liver building at this point- one of the most famous buildings in the UK. and instantly recognizable. 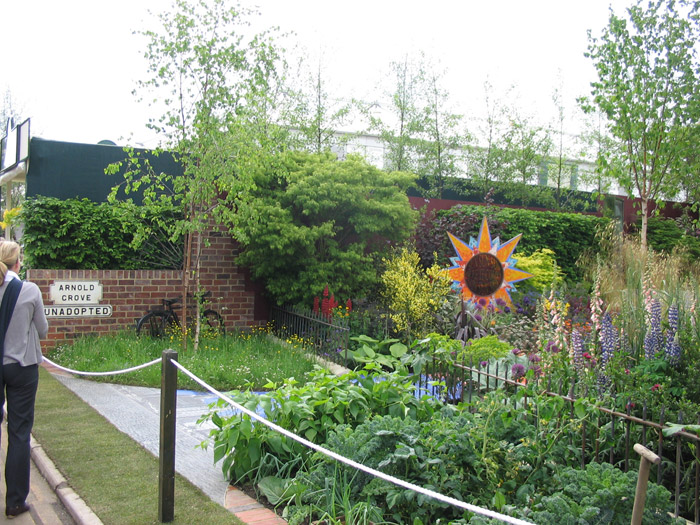 From here a step upwards led to the garden representing George’s youth and the Beatle years.
Brian’s path at this stage is a riot of colour, closely matched by the planting – a heady mix of colour, texture, form and foliage. I tried to use many of the sort of plants George would have used at Friar Park- Birches, Acers, grasses and perennials. Brian Clarke made the giant sun with the words ‘Sun sun sun here it comes’ written across the centre. Amazing how many journalists described it as a star…..
Up two more steps and into.

George loved moss gardens and the associated plantings of ferns, and low shade- loving perennials. Three birches provided height in this area. Separating this garden from the afterlife was a rill – a narrow water- filled canal- at the head of which was a waterwall. For those of you who are not into gardening, a waterwall is like a waterfall, except here the water clings to the glass or stone surface rather than splashing over it. The waterwall was originally to have a plain glass or metal surface but it became the perfect place for displaying an image of George., Olivia found a great photograph taken during filming, with gumboots and an umbrella. The expression on his face perfectly illustrated George’s sense of humour, and actually reduced many fans to tears as they walked past. We placed steam jets along the rill, so you stepped through a gentle haze and up three steps to nirvana or the afterlife. 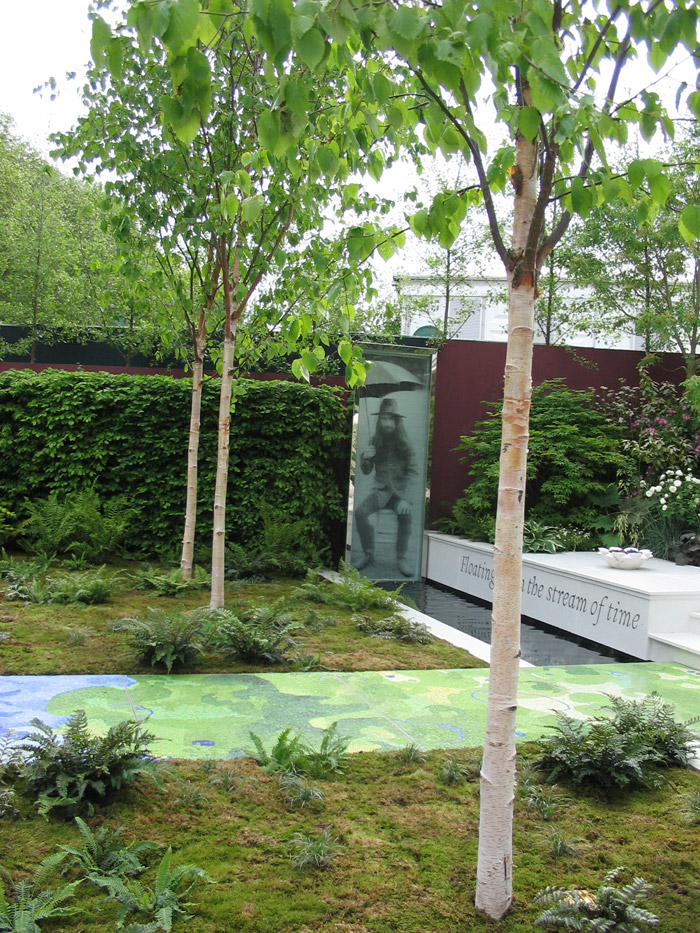 In this garden, a recycled white marble floor provided a base for a beautiful white canvas pavilion with carved aluminum motifs and a clear glass finial. Curved arches with metal infills skillfully etched and limed oak posts. Marble pots, some with Zantedeschias, and others with flower petals. Velvet cushions fringed in gold. Scented white planting, incense burning in the foreground and George’s music playing softly in the background. . This was a heavenly place to be..

Many of our suppliers had links with Friar Park in the past and all were thrilled to be involved in the project. Huge thanks to them all: Joe Perkins and Hilliers landscapes who built the garden; Brian Clarke who created the amazing path; Organic Stone –Brian Vicky and Sue who developed and supplied the recycled marble: White canvas –Justin and Fay who created the pavilion and all the decorations on it; Hot Metal Engineering- Toby Clayton– who supplied the ‘Liverpool’ fencing and the lettering long the rill. Thanks to our plant suppliers -Andy McIndoe and Ricky Dorley at Hilliers Nurseries; Toby and Chris at Orchard Dene; Rosie and Hilary at Hardys Cottage garden plants and Robinson’s vegetables. All helped to make ‘From Life to Life, a Garden For George’ the beautiful garden it was and will be when it is reinstalled at Friar Park. Everyone who saw the garden loved it – we have had hundreds of letters and messages through the mail box and over the internet, and, of course, a really big plus for Olivia and I was meeting the Queen.